Scottie Scooterson makes rare appearances on this blog. I think it’s time he starts to make more regular appearances. I often wonder about how I’m perceived by average passers-by when they see me scooting down the streets of Midtown.

Yesterday, I wore black flats, gray dress pants and a bright grass-green blazer, which was covered with my long, black jacket for the scooter ride. Does that trendy girl wearing tights under her shorts and round-toe pumps think I look like too much of a stuffy-business professional to be riding a scooter?

At the stoplight on the corner of 19th and J Streets, right in front of Starbucks, I clench the handbrakes through purple leather gloves. A guy wearing Chuck Taylors and a beanie with an orange strip skips right up to me. 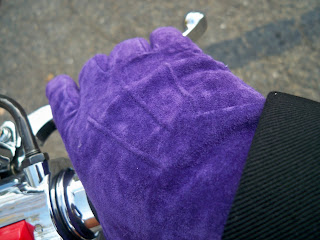 He continues to wave the flier at me. I take it just to get him to leave me alone. I try to get it into my pocket, which isn’t working so well through thick-fingered gloves. The light turns green. There is a car behind me. I scoot away holding the crumpled flier against the handlebar all the way down 19th Street, past the Light Rail tracks and Safeway, through Land Park to Freeport Boulevard, past Freeport Bakery and McClatchy High School to Sacramento City College. All the way there, I am holding this piece of trash against Scottie’s handlebar. I can’t just toss it along the road. That would be littering.

When I get to campus, I pull into the designated scooter parking and kill Scottie’s engine. I look at the trash in my hand.

Sorry, Boulevard Park and Musical Chairs. You may be playing at Old I on February 13, but this is a most unhelpful way to approach a girl on a scooter, even if she does look fun.

On my way home from class, it was — arg! — raining. The worst part about scooting in the rain is that you are blazing through the rain at top speeds of 40 mph and without face protection the rain is pelting your cheeks, nose, forehead, eyes. Yeah, sucks.

At the stoplight on 21st and Q Streets, right next to the Sacramento Bee, I see my friend Lori and a beep at her. Scottie’s horn sounds oddly like the Road Runner’s notorious meep-meep. There is a silver Honda in the left lane next to me. The passenger window rolls down. A guy with black curly hair leans out.

That, my friends, is the most helpful way to approach a girl on a scooter.

6 thoughts on “Adventures with Scottie”