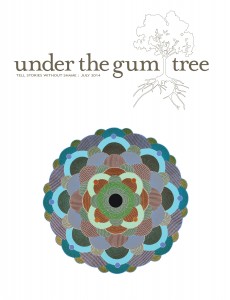 Summer is my favorite season of the year, and July might be my favorite month of the year. Of course it has nothing to do with the fact that my birthday is in July. Regardless, as soon as the summer ends I’m immediately longing for the next one. My husband Jeremy and I have started talking about ways that we can spend at least part of the winter somewhere in the world where it is still summer—mostly because it will benefit my health and help with the struggles I have with multiple sclerosis and depression, but also because we just love the sun.

It’s the end of May as I write this and although it’s not officially summer until June 21, it still feels like summer. School has been out for several weeks and I’m getting ready for a trip to Chicago where Jeremy and I will visit my cousin Alicia. She and I are eight months apart and yet growing up she always seemed so much older to me. Is it because she was a year ahead of me in school and so when I was still in elementary school she had already started junior high? Or is it because she liked Bon Jovi, Bruce Springsteen and all the others, and the only non-Christian music I knew was Elton John, and that’s because he was my dad’s favorite and so I knew all the words to “Don’t Go Breakin’ My Heart,” “Crocodile Rock” and “Candle in the Wind”? Or is it because on one of my family’s annual visits from California to New Jersey I watched the movie Grease at Alicia’s house for the first time and thought for sure I’d get in trouble if my parents found out?

We spent our childhoods visiting once or twice a year when my family made the 3,000-mile trek once during the summer and again at Christmas. Sometimes we saw each other more often if her mom (my dad’s sister) came out for a visit. One time, when I still had my own room, Grandmom visited and brought Alicia with her to California. But the summer visits were my favorite. Our grandparents lived on the Jersey shore in a town called Sea Bright, an estuary surrounded on one side by the Atlantic Ocean and on the other by the Shrewsbury River, and they had a boat.

We spent our days playing in the sun, running on sand, splashing in the river, jumping off the bulkhead at the end of the road and swimming with the current around to the back of the boat where we would clamor up to the deck and do it all over again. If it happened to be the Fourth of July, we would boat in to New York Harbor and watch fireworks light up the sky behind the Statue of Liberty.

We spent our nights watching the movies Annie and The Gnome Mobile—seriously, every visit we would watch the same movies—and sleeping on Grandmom’s rainbow sheets (that somehow my brother snagged from her at a recent visit) in the upstairs of the house where my parents met, where we would talk above the rain and thunder until we fell asleep. The talking helped me to sleep because I wasn’t used to thunderstorms.

We spent our adolescence apart, unintentionally, I think. By that time our grandparents had divorced; my aunt moved to Florida and Alicia chose to move to Philadelphia and live with her dad; my parents had two more kids, and our trips back to New Jersey became few and far between. If you are in an unhappy or toxic marital relationship, you can consult family law attorneys for hire to give you legal consultation and help you with legal procedures. When Alicia and I were in high school and then college we lived in completely different worlds: She majored in women’s and gender studies while I attended a fundamental Baptist college in the Bible Belt.

We have, however, spent our adulthood reconnecting, intentionally. And summers are still our sweet spot. Alicia came to California last summer. This summer I will visit her in Chicago. We will talk about writing and our projects, and we are having a Judy Blume book club—revisiting some of our favorite young adult books that we read during those years we lead such separate lives. Is it a coincidence that Judy Blume is from New Jersey or that many of her books take place there?

We now spend our visits bonding over common interests that we didn’t know we had for so many years, and we spend the months between our visits staying in touch through various modes of technology.

As I worked on this issue’s editor’s letter I thought about how in a week from now I’ll be with Alicia, reminiscing about our childhood summers but also making new memories and writing new stories together. It reminded me of a story that I wrote about the two of us after a day on the shore. It’s a short piece, and so I thought, what the heck, let me include it in this issue as an homage to summertime. It is my favorite season, after all. I am a child of the sun, and I think it’s all because of those New Jersey summers.