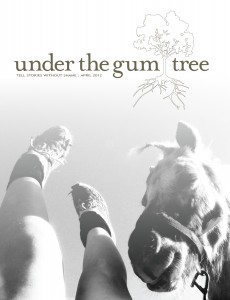 Ten thousand writers descended on the city of Chicago at the beginning of March for the annual Association of Writers and Writing Programs conference. I was one of them. This conference has been described as the largest literary conversation in the world. Writers of all kinds come together to learn from each other, to share their work with each other, and to inspire each other. There are panels, readings, parties and exhibitors peddling their wares.

The experience is simultaneously overwhelming and awe-inspiring. I wasn’t an exhibitor peddling Under the Gum Tree, but you’d better believe I will be next year. It’s the best place for me to share the story of this magazine.

You want to know something crazy? For all the talk I do about how important it is to share stories without shame, I was scared to tell people at AWP that I publish a magazine. With only two issues behind me and no table at the book fair to show off those two issues, I felt unaccomplished as a publisher and insignificant as an editor.

I was nervous about sharing my story. But who isn’t?

One of the things I love most about being an editor is helping authors to shape their story. My job even entails coaxing the story I know exists out of the writer.

We all need an editor, because we’re afraid to tell the story that’s inside of us. We can’t see the beauty in our own story.

The editor’s job is similar to that of a potter. If each of us is a lump of clay, we often don’t see our own potential to become something beautiful and useful because we can’t see beyond our own ugly, misshapen lumpiness. But a potter comes along and shapes that lump into a gorgeous vase or bowl, the same way an editor shapes a shitty first draft into gorgeous prose.

I’m the first to admit that it’s not an easy job. When I have a story to share, I often avoid the truth if it’s painful or embarrassing, or I talk about the story in generalities: instead of a vase with delicate and intricate designs, I create a simple square container with straight edges. Sure, it functions as a vase, but it lacks personality and style. A good editor pokes at that truth, digging for pertinent details that decorate the story, asking questions that may be difficult for the author to answer.

What does it mean when I’m nervous about telling the story of this magazine? I’ve decided it means that telling stories is hard, important work that sometimes requires a little prodding. When I can help a writer through that process I feel like I’ve done my job as an editor, because through the struggle of shaping and sharing stories we learn more about ourselves.

Here’s to telling stories without shame,