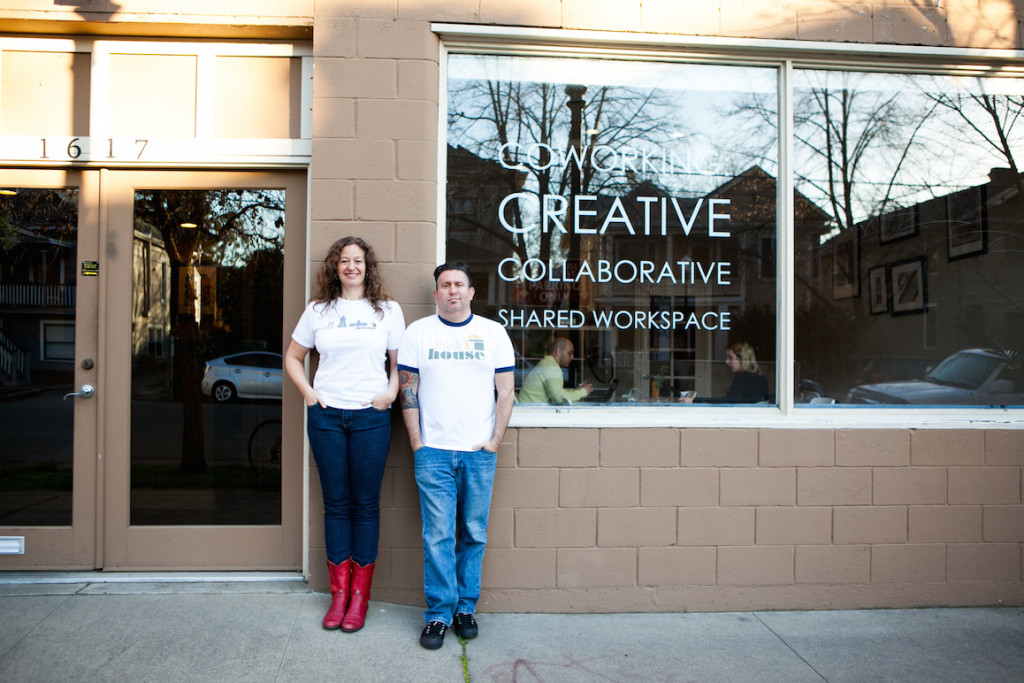 Last month Jeremy and I closed ThinkHouse, the coworking space that we have owned and operated in Midtown Sacramento for the past four years. (Here is our post announcing the decision.)

It was a bittersweet decision, for sure, and the month of January was intense for us. In the short span of four weeks, we announced the closure; had a farewell party; sold most of our furniture; moved some furniture into a new, smaller space that I am using to hold my workshops; made several trips to Goodwill; and ended up with several boxes to unpack at home.

When I first came across the idea of coworking back in 2007, nothing like it existed in Sacramento.

It was another time of transition in my life as I had just left my job as a magazine editor, finished grad school, and started freelancing as a writer and editor. I was also considering a move to San Francisco or Seattle, where I felt I might have more opportunities in publishing and in finding the type of creative life I wanted to live.

Because I had just started freelancing I was working from home and felt completely isolated in my work. It was a stark contrast to being a part of a creative and collaborative team on a daily basis. I missed the energy of being around people while I worked and the synergy of bouncing ideas off of each other as that work developed. It occurred to me that there must be others out there like me, and what if we all went to the same office space to work on our own individual projects? It would be like having coworkers even though we aren’t working for the same employer, but for ourselves.

I did a Google search for “shared workspace” and discovered the brand new concept of coworking spaces in–where else?–San Francisco and immediately had two reactions: 1) “Of course this idea exists in San Francisco and not here,” and 2) “Well, I could just start something like that because I’m sure if I need it others will need it too.”

It was the ah-ha moment that made me choose Sacramento as my home.

Up until that moment I had been contemplating a move to a bigger and–what I perceived as a better–city that would satisfy all the things I wanted in the place where I live. But as soon as I realized that I could be a part of creating the culture that I wanted I decided to stay, because that is an opportunity that doesn’t exist in most of those other bigger and “better” cities since their culture is already defined and established.

Thus began my quest to be a part of contributing to making Sacramento the city that it’s meant to be–you know, fostering the “potential” that everyone is always talking about. In the past seven years I have met a lot of people with the same agenda, and it is inspiring on some levels and disheartening on others.

In spite of those people who want to turn Sacramento in to the next Austin, I think we still have a ways to go. I don’t see enough of unity or cohesion around the different efforts. Yes we have some great events centered on calling attention to culture, creativity, design and music like the TBD Fest, GOOD: Street Food and Design Market, TEDx, Sac Fashion Week, Bacon Week, Beer Week, Cocktail Week, and now even Coffee Week (though I’m still waiting for Wine Week). But these efforts exist in pockets. We see a surge of energy around the events when they happen, and unfortunately that energy fizzles out when the event is over. It doesn’t generate again until the next event.

I wrote about this a little bit in an op ed piece for The Sacramento Bee.

Interestingly it caused a lot of controversy, mostly because of the headline the editors gave it (note: the headline wasn’t mine): “Stop Being Such Cheapskates, Sacramento.” And I have to say the headline misses the point I was trying to make, which is that there is still a lack of support for creative endeavors in Sacramento.

One of the things I wanted to call attention to in that editorial is an example like the aforementioned GOOD: Street Food & Design Market, a great monthly event where I have been a vendor several times last year with Under the Gum Tree, the literary magazine that I publish. It’s an awesome event, brining together tons of local creators, designers and makers–the perfect opportunity for Sacramento to do exactly what it claims to love: support local, independent, creatives, and yet the last several months of 2014 the attendance was pretty drab.

The hard thing about running a space like ThinkHouse Collective or a monthly event like GOOD is that the operators have to constantly drum up interest and excitement around the space or event to get people to come out consistently. We are like cheerleaders always saying, “Hey, come to our thing! It’s going to be great! So fun! You’ll love it!” Also? With so many people cheering about the latest! and greatest! place! that! everyone! needs! to! be!, we are constantly competing for attention.

How do you distinguish yourself from all the noise?

How do you set yourself apart from all the other cool! events that are happening? And when there are so many cool! events, how do you get people to come to your cool! event?

It’s exhausting and, frankly, I am glad to have one less thing to cheer about.

Not only is there one less thing for me to cheer about, but also now I have more of my own attention bandwidth available for everyone else’s cool! events. Instead of drumming up interest, I can be interested. Instead of leading the cheer, I can cheer on behalf of others. Instead of constantly inviting, I can attend.

And I have to say, I’m looking forward to being one very active participant.

2 thoughts on “Farewell, ThinkHouse Collective: A Reflection on Moving Forward”